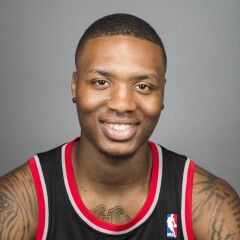 Selected by Portland as the #6 overall pick in the 2012 NBA Draft, Damian started in all 82 games during his rookie campaign. He led all rookies in scoring averaging 19.0 points, 3.1 rebounds, 6.5 assists and 38.6 minutes per game. In the Trail Blazers season opener versus the Los Angeles Lakers, Damian joined Oscar Robertson and Allen Iverson as the only players in NBA history with at least 20 points and 10 assists in their NBA debut. Damian was named the NBA’s Rookie of the Year in May 2013, becoming just the fourth unanimous Rookie of the Year in NBA history. He swept the Kia NBA Western Conference Rookie of the Month honors for all six months, becoming one of just eight players to sweep NBA Rookie of the Month honors since the inaugural award in 1981-82, joining Ralph Sampson, David Robinson, Tim Duncan, LeBron James, Carmelo Anthony, Chris Paul and Blake Griffin. Damian joins Oscar Robertson and Allen Iverson as the only rookies in NBA history to record 1,500 points and 500 assists in one season. In April of 2013, Damian broke the all-time NBA rookie record for 3-pointers in one season with 185, surpassing Stephen Curry’s 166 set in 2009-10, Damian is the first Trail Blazer to win an NBA All-Star event, capturing Saturday night’s Skills Challenge. He also participated in the Rising Stars Challenge during All-Star weekend, finishing with 18 points, 3 rebounds and 5 assists in a game-high 28 minutes. This summer, Damian was named to the 2013 USA Basketball Men’s National Team mini-camp roster.